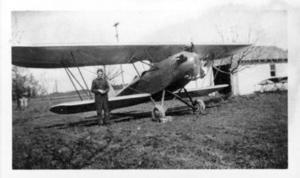 A garage, an airport, a well and a weather station almost changed the name of Hazel Dell. As a youthful Belgian immigrant, Basil Dhanens (1894-1972), traveled across the country to live with Clark County relatives on their farm. Arriving at Portland’s Union Station, he possessed $1.50, black bread, a sausage and a hardened chunk of chocolate. Like many orphans coming west, his name could have easily been forgotten.

On the farm, young Dhanens milked cows and sought jobs. The 39th Street SP&S railroad maintenance shop hired him to pick up parts. Recognized as bright and hardworking, a mechanic taught him to use a lathe and turned the youth into a machinist.

In 1923, near the intersection of 78th Street and Hazel Dell Avenue, he opened his first business, Basil’s Garage, to service Ford automobiles and farm equipment. Later, he moved the garage east to Highway 99.

Bit by the flying bug, Dhanens added a machine shop and built a biplane. During the late 1920s and 1930s, he flew in amateur regional air races. The land near his business became his airstrip and evolved into the short-lived Hazel Dell Airport. Dorothy Hester, Tex Rankin’s champion stunt pilot, commemorated its opening by signing envelopes. The envelopes also bore a stamp showing a biplane sandwiched between these lines: “Dedication ‘Basil’s Airport’ at Hazel Dell, on Pacific Highway—Vancouver, Washington, April 15, 1934, Basil Dhanens, Owner, Mgr.”

When Basil’s Airport closed isn’t known. But flying and farming made him acutely aware of the necessity for accurate weather reports. So he set up his own weather station. From the small six-sided building, he broadcast daily weather reports at noon for five minutes from a 50-foot tower. His local reputation as a weatherman grew enough that Popular Science featured him in a March 1939 article.

For a while, Dhanens ran a one-man water department. He drilled a 170-foot well on his property and provided nearby homes with water through the 1950s, until Clark Public Utilities took it over. His contributions to Hazel Dell were significant enough locals wanted to rename the area Basilville. He kindheartedly declined.

Martin Middlewood is editor of the Clark County Historical Society Annual. Reach him at ClarkCoHist@gmail.com.