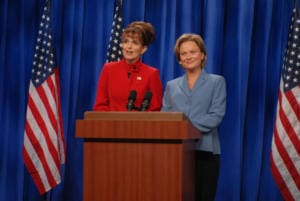 Jim Carrey temporarily joining the the cast of “Saturday Night Live” to portray Joe Biden has me reflecting on my favorite impersonations of politicians in the show’s 45-year history:

Fred Armisen as David Paterson: Emphasizing the former New York governor’s partial blindness could have come across as a cruel joke, but there was a sweetness in the way Armisen wandered aimlessly around the “Weekend Update” set. Paterson, who initially balked at the portrayal, eventually came around, appearing as himself in 2010.

Tina Fey as Sarah Palin: The show’s former head writer looked so much like the vice presidential candidate that even Fey’s own daughter had a hard time telling them apart. Fey took full advantage, capturing both the Alaska governor’s guile and gumption in a string of Emmy-nominated appearances.

Will Ferrell as Janet Reno: The comic superstar’s take on George W. Bush would end up on Broadway, but he really found his rhythm as host of “Janet Reno’s Dance Party.” The late attorney general showed she had a fine sense of humor — and some fine moves — when she crashed the basement bash during her last day in office.

Darrell Hammond as Dick Cheney: This longtime cast member, who left in 2009 but remains the show’s announcer, may have turned in more political impersonations than anyone in “SNL” history. But he peaked with his interpretation of the vice president as a James Bond villain.

Dana Carvey as Ross Perot: The show’s standout star for seven seasons became best known for his affectionate take on George H.W. Bush, but his impersonation of Perot was more hilarious, imagining the former presidential candidate as the Church Lady with elephant ears. Any signs of sympathy went out the window.

Maya Rudolph as Kamala Harris: Rudolph just won an Emmy for her portrayal last season of the California senator, so expect more pop-ins from the former cast member now that Harris is on the Democratic ticket. No matter how well Carrey delivers as Biden, he’ll have a hard time not getting overshadowed by his running mate.

Kate McKinnon as anyone she wants: For my money, Kristen Wiig and Eddie Murphy had the two greatest runs in “SNL” history. But McKinnon is nipping at their heels, thanks to her layered performances as Hillary Clinton, Jeff Sessions, Rudy Giuliani and Kellyanne Conway.